SAVEMEDCOASTS-2 at the Sicily of the Future event

SAVEMEDCOASTS-2 was presented in Alcamo and Agrigento on 10 and 11 December 2021 during two days of The Sicily of the Future, an initiative created by MEP Ignazio Corrao. The events, which were held in accordance with the current anti-covid regulations, were dedicated to an analysis of the effects of climate change in marine environment and coastal zones in this region of southern Italy. To understand the ongoing phenomena, gaps, needs and critical issues MEP Corrao involved scientists from different institutions, politicians, entrepreneurs and spectators.

Marco Anzidei, coordinator of the european project SAVEMEDCOASTS-2, funded by DG-ECHO, spoke about the causes and effects of the sea level rise on global coasts, focusing on the Mediterranean and the expected flooding scenarios in eastern Sicily and the Aeolian Islands. The events were attended by INGV researchers Giovanna Piangiamore, who involved people with topics and activities on climate change and the scientific diver Cinzia Caruso who presented the state of the acidification of the oceans and the Mediterranean. 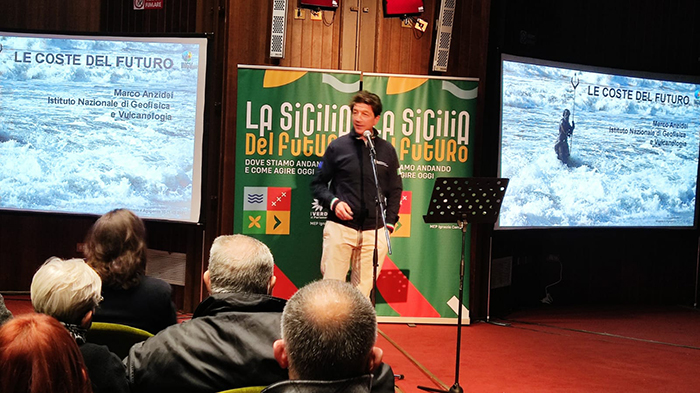