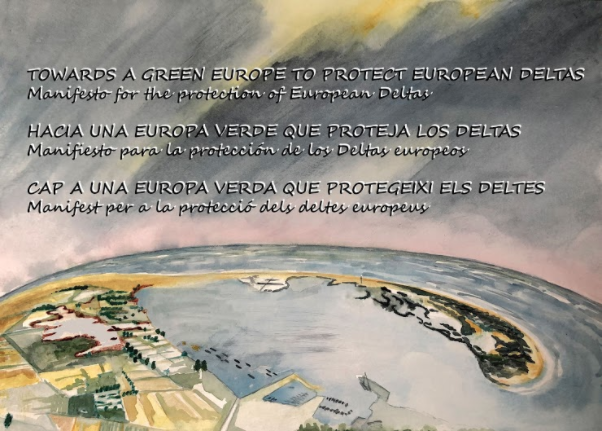 “In Europe there are deltas of high socio-economic and ecological relevance, such as those of the Danube, the Vistula, the Rhine, the Po, the Rhone or the Ebro, that suffer increasing risks of erosion, subsidence, flooding and salinization. Their effective conservation throughout Europe has to be a political priority for the European institutions if their survival is to be guaranteed.”

SAVEMEDCOASTS-2, which is investigating the Ebre, Rhone and Nile deltas in the Mediterranean region, signed the manifesto  for European Deltas preservation. Launched on February 3rd 2021 by two Spanish Members of European Parliament, Diana Riba and Antoni Comin,  and the Platform in Defense of the river Ebro (Plataforma en Defensa de l'Ebre), voluntary organization in Spain, the manifesto is addressed to the European Commission.

Deltas are coastal systems formed by the contribution of water and sediments from rivers; they are extremely vulnerable to flooding, especially due to the effects of climate change and poor river basin management. There are about 10,000 deltas in the world, and some 339 million people live in them.

“Sea level rise is heavily threatening deltas with coastal floodings, erosion and several cascading effects such as salinization, ecosystems alteration and sanitary risks. In addition, geological processes that favor soil compaction make these lowlands to be highly subsiding and therefore sinking. Their physical, ecological and socioeconomic integrity is threatened also by the increase in the frequency and intensity of sea storms and the bad management of their hydrographic basins”, says Marco Anzidei, SAVEMEDCOASTS-2 coordinator.

Despite the European legal framework having several regulatory texts that, directly or indirectly, affect the conservation and management of deltas, the EU regulatory directives are not sufficient to guarantee the physical protection of the deltas.

A comprehensive management is necessary, since river delta survival does not depend exclusively on actions carried out locally. The European Commission is called to increase efforts to conserve and restore European deltas, especially within the framework of the Water Framework Directive and its implementation in the Member States.

“Bring together environmental groups, social movements, academia, and European parliamentarians on the issue of European delta protection is a compelling action”, say Diana Riba and Antoni Comín, launching the manifesto that has four key points:

It can be subscribed online filling a form open until the week of 8 March 2021, plenary week in the European Parliament in Brussels, when it will publicly presented to the Vice President of the European Commission Frans Timmermans and the Commissioner for the Environment, Virginijus Sinkevičius, responsible for the European Green Deal.